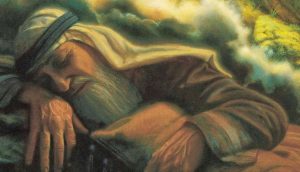 Book of Mormon scholars (starting with Noel Reynolds, I believe) have long pointed out that Nephi used his small plates — written 30 to 40 years after leaving Jerusalem — to make his case to be Lehi’s rightful heir, both temporally and spiritually (see my own observations here). Part of making that case is to portray Lehi himself as a true prophet of God, something Laman and Lemuel repeatedly disputed.

For behold, it came to pass that the Lord spake unto my father, yeah, even in a dream….

We know that Nephi had the brass plates, and that

And it came to pass that my father, Lehi, also found upon the plates of brass a genealogy of his fathers; wherefore he knew that he was a descendant of Joseph, yea, even that Joseph who was the son of Jacob… (1 Nephi 5:11-14)

So, what do the five books of Moses have to say about dreams and those who receive them? Four things, really.

First, we have this pronouncement by God to Moses, rebuking Aaron and Miriam who claimed that God had spoken to them:

And he said, Hear now my words: If there be a prophet among you, I the Lord will make myself known unto him in a vision, and will speak unto him in a dream. (Numbers 12:6)

Nephi likely very much had this verse in mind, since within the first (original divisions) chapter of his book, he has Lehi being “carried away in a vision” and seeing God (1 Nephi 1:7-15) and then has God speak to him in a dream (cited above).

Second, we see that both Jacob and Joseph — of whom Lehi is a descendant — had prophetic dreams. Jacob, on his way to Haran to find a wife, has a dream of a ramp or stairway ascending to heaven, with angels coming and going. He meets God face to face at an entrance or doorway at the top of the ramp, and God covenants with him to give him land and bless his posterity. (Genesis 28:10-22)

After serving Laban for 20 years, Jacob receives another dream, telling him to take his family and his possessions and go back to his promised land, Canaan. (Genesis 31:3-13) Note that Jacob suffers afflictions for following his dreams — Laban is an unfair taskmaster and father-in-law on several levels and is quite angry when Jacob leaves unannounced — but receives a dream of his own telling him to let Jacob leave in peace. (Genesis 31:24)

Joseph, Jacob’s favorite son and Lehi’s ancestor, also famously has prophetic dreams and interprets the dreams of others. Joseph’s two dreams of his older brothers and even his parents paying obeisance to him (Genesis 37:5-11) lead his brothers to “hate him yet the more”, and they famously sell him into Egypt. While in prison there, he interprets — correctly — the dreams of Pharaoh’s chief butler and baker. (Genesis 40:5-23) This, in turn, leads to Pharoah calling upon him to interpret his own dreams, which Joseph does and ends up becoming Pharaoh’s vizar. (Genesis 41:1-45) It is in that role that his older brothers come to him to beg for grain and — not recognizing him — fulfill Joseph’s original dreams.

Third, we see the Lord giving prophetic or warning dreams to non-prophets, but they always either a caution to leave a prophet alone or require the interpretation of a prophet to understand. Thus we have Abimelech (Genesis 20:3-6) warned to leave Sarah, Abraham’s wife, alone; and Laban (as per above) warned to let Jacob leave with his family and flocks.

Fourth, in the statutes and judgments given to Israel in Deuteronomy is this caution:

If there arise among you a prophet, or a dreamer of dreams, and giveth thee a sign or a wonder,  and the sign or the wonder come to pass, whereof he spake unto thee, saying, Let us go after other gods, which thou hast not known, and let us serve them;  thou shalt not hearken unto the words of that prophet, or that dreamer of dreams: for the Lord your God proveth you, to know whether ye love the Lord your God with all your heart and with all your soul.

Ye shall walk after the Lord your God, and fear him, and keep his commandments, and obey his voice, and ye shall serve him, and cleave unto him. (Deuteronomy 13:1-4)

Nephi, of course, goes to great pains to show that Lehi is not leading his family away to “go after other gods” but to serve the true and living God, and thus is a true prophet.

Besides the dream command Lehi to flee into the wilderness with his family, Nephi cites two more dreams of his father. One is for Nephi and his brothers to go back and get the plates of brass from Laban (1 Nephi 3:2-5); the other is Lehi’s dream of the Tree of Life (1 Nephi 8). Thus, with these three dreams, we see Nephi laying out patterns drawn directly from the brass plates:

Book of Mormon scholars have long noted how strongly Nephi uses Exodus motifs in putting together his historical section (1 Nephi and 2 Nephi 1-5). But I believe he also ties Lehi back to Jacob and Joseph through his dreams, as a second witness to Lehi’s calling as a prophet.

I always treat articles like this — heck, just about any article (or, for that matter, paper) on Bible-related archaeological “findings” — with a spoonful of salt. That said, this is interesting:

Archaeologists Dr. Hamoudi Khalaily and Shua Kisilevitz, said, “The ritual building at Tel Motza is an unusual and striking find, in light of the fact that there are hardly any remains of ritual buildings of the period in Judaea at the time of the First Temple. Among other finds, the site has yielded pottery figurines of men, one of them bearded, whose significance is still unknown.”

“The iconography points to a pantheon of deities, as some scholars believe, or to two main deities, something of a duality,” says archaeology writer Julia Fridman, writing in Israeli newspaper Haaretz.

“Interestingly, there are vastly more female figurines and representations found on shrines than there are male ones. The evidence points to the worship of at least two deities. . . .

Professor Francesca Stavrakopoulou of the University of Exeter said, “There is increasing evidence that the ancient Israelites worshipped a number of gods alongside their ‘national’ patron deity, Yahweh. The goddess Asherah was among these deities.

“Not only is she mentioned in the Hebrew Bible (Old Testament), but inscriptions dating to the eighth and seventh centuries BCE attest to her worship alongside Yahweh in the kingdoms of Israel and Judah. Taken together, the biblical and archaeological evidence strongly suggests that Asherah was worshipped by some Israelites as the wife of Yahweh. They were likely a divine couple at the head of the local pantheon.””