I found the following article on-line thanks to Google News:

How corrupt are the Democrats with the Mormon Mafia/CIA?

For many years I have warned members of the Mormon Church about secret operations the CIA uses through foreign returned LDS missionaries in controlling every day life throughout the world. The only location not under the control of the Mormon Mafia is the US general public. Americans still believe Mormons are a cult. Since the days of Brigham Young and the announced “Utah War” in 1857 after Albert Pike and the Freemasons (including Heber C. Kimball and BYoung) murdered Mormon Apostle Parley P. Pratt near Fort Smith, Arkansas (9/11/1857 Mountain Massacre beginning event) the One World Order group has (money-changers) failed to destroy the US of A. The following special question given to the three leading Democrat candidates in New Hampshire, plus a recent exposed Democrat letter reflect how corrupt politics has become…

Each time I re-read this paragraph, I keep thinking: there’s a wonderful alternative-history novel in there somewhere. There may even be a coherent and logical train of thought in there, though I have less hope of that; as far as I can tell, just about every sentence (and the occasional individual clause) is a non sequitur to all that precedes it, which itself is a pretty amazing accomplishment.

However, the truly remarkable thing is that the rest of the article, which is quite lengthy, never again mentions Mormons or the LDS Church, which makes the title and opening paragraph even more mystifying — but not as mystifying as to why Google News accepts that web site as a news source. YMMV. ..bruce..

[Note for puzzled readers: “YMMV” is not the Mormon Tetragrammaton. It’s a well-known ‘net acronym for “Your mileage may vary.”]

[And just because I like it so much, I’m putting up this picture again: 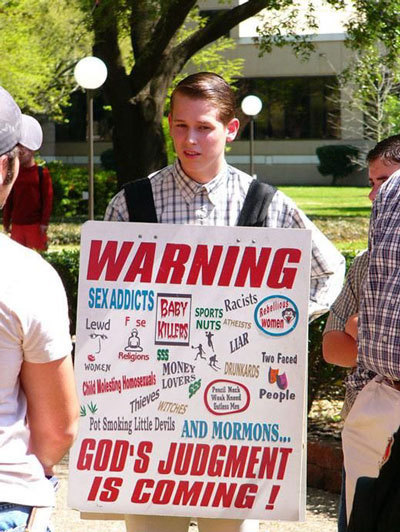 The photo originally came from here. ..b..]