After a lot of will-he-won’t-he? back and forth, Mitt Romney gave ‘the speech‘ on how his membership in the Church of Jesus Christ of Latter-day Saints would or would not affect his role as President of the United States, should he be elected. Here, in my opinion, is the key section:

As a young man, Lincoln described what he called America’s “political religion” — the commitment to defend the rule of law and the Constitution. When I place my hand on the Bible and take the oath of office, that oath becomes my highest promise to God. If I am fortunate to become your president, I will serve no one religion, no one group, no one cause and no one interest. A president must serve only the common cause of the people of the United States.

There are some for whom these commitments are not enough. They would prefer it if I would simply distance myself from my religion, say that it’s more a tradition than my personal conviction, or disavow one or another of its precepts. That I will not do. I believe in my Mormon faith and I endeavor to live by it. My faith is the faith of my fathers. I will be true to them and to my beliefs.

Some believe that such a confession of my faith will sink my candidacy. If they are right, so be it. But I think they underestimate the American people. Americans do not respect respecters — excuse me — believers of convenience.

It’s a sad commentary that he has to do it at all, but there’s a fair amount of anti-Mormon prejudice on both the Left and the Right — and as many other commentators have pointed out ad infinitum et ad nauseum, if the things being said on both sides were being said about Evangelicals, Catholics, Jews or Muslims, cries of ‘hate speech!’ and ‘bigotry!’ would fill the air.

As far as I’m concerned, Romney (who, by the way, is not my choice for President), could have simply quoted two of the thirteen Articles of Faith, a canonized set of statements composed by Joseph Smith in 1842 regarding our fundamental beliefs:

11 We claim the privilege of worshiping Almighty God according to the dictates of our own conscience, and allow all men the same privilege, let them worship how, where, or what they may.

12 We believe in being subject to kings, presidents, rulers, and magistrates, in obeying, honoring, and sustaining the law.

Of course, the real elephant in the GOP tent is the deep conviction on the part of many Evangelists that the LDS Church is secretly a Satanic organization. This is just goofy beyond words, quite literally on par with those who believe that the Protocols of the Elders of Zion is a true and accurate document regarding Jewish plans for world domination, and yet it is pervasive throughout Evangelical churches. The rank anti-Mormon (not to mention anti-Catholic and anti-Islamic) bigotry of large segments of the Religious Right is a major reason why I have never joined the Republican Party, despite being appalled for many years by my own party (I’m a lifelong registered Democrat). 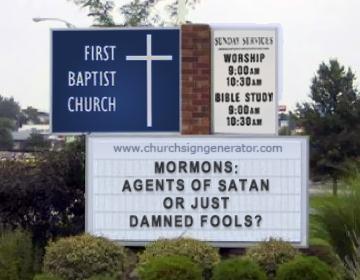 As for whether other Christian denominations consider the LDS Church to be Christian — again, I think that’s just silly, and I think it says far more about those churches and the individuals who lead them than it does about the LDS Church. I don’t feel bound by the doctrine and theology of these other denominations, so I’m certainly not concerned about their definition of who is or is not “Christian.” Christ said, “By their fruits, ye shall know them” — and I’ll cheerfully stack up our record on honesty, morality, integrity, and humanitarian service (not to mention our views on near-universal salvation) against any other Christian denomination that cares to take the challenge. ..bruce..