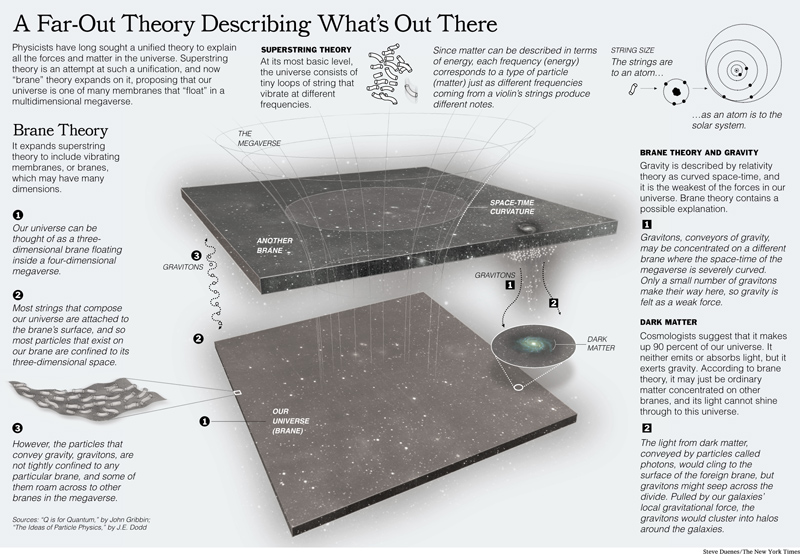 The first published article I ever wrote was “Some thoughts on higher dimensional realms”, co-authored with Dr. Robert P. Burton of the BYU Computer Sciences department and published in BYU Studies, Vol 20, No. 3 (Spring 1980).  You can read the whole article here; the gist of it is that there are events and descriptions in the scriptures and other religious sources that could be interpreted as meaning that we are a three-dimensional universe existing within the context of one with (at least) a fourth physical dimension.

Now, physics and cosmology didn’t give a lot of support to the idea of a fourth macroscopic physical dimension at the time (string theory posits quite a few extra dimensions, but all on the subatomic level). However, starting about 30 years ago, some cosmologists started seriously putting forward the concept of our 3-D universe being a membrane (or “brane“) within a 4-D physical universe.

One of the latest papers to come forward attempts to account for the ‘inflation’ problem in cosmology by postulating that our universe is actually the 3-D cross-section of a 4-D nova collapsing into a black hole — that is, the singularity of the big bang is actually the event horizon of a 4-D black hole, and our universe comprises the matter outside that event horizon (or a 3-D cross-section thereof). According to the authors, this help explain the uniformity across the observable universe without resorting to some type of cosmic hyper-inflation.

I have no idea how the proposal will hold up, but it is satisfying to know that there are at least some cosmologists out there who believe we are embedded in a 4-D universe. ..bruce..