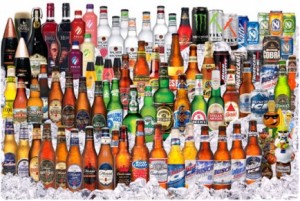 “Buy a lot of it,” says Trey Click, a magazine publisher who rode out last year’s Hurricane Ike in Galveston, Texas. “It’s one of the only things you can use for money in the aftermath.” Need your neighbor to help you clear trees out of your yard? A case of Bud is a better motivator than a $20 bill when all the stores are boarded up.

I doubt that most of us would stock beer in our emergency preparedness supplies, particularly those who still have teenagers at home (it’s just asking for trouble), not to mention the actual ethical dilemma of handing out beer to our neighbors. Still, the issue that Click brings up is a good one: what can you barter with in the aftermath of a major disaster when money isn’t of much immediate value? I’m not sure canned soda (particularly if there’s no power) has quite the same caché. Maybe those large boxes of candy bars you get at Costco? Thoughts?

Here’s my own contribution to “unusual survival staples”: make sure that many of your critical battery-operated devices use C cell batteries. Sandra and I were living four miles from the epicenter, on the Santa Cruz side of the mountains, when the 1989 Loma Prieta earthquake hit and so were in the thick of things; also, the main highway (Hwy 17) from San Jose was closed for six weeks due to landslides. Within 24 hours or so, all the local stores were completely out of AAA, AA, and D cell batteries, but they had piles of C cell batteries (in the case of the Soquel Safeway store, it was literally a pile on the floor, and quite a large one).  ..bruce..